Welcome to my guide on the best worm composting bins and kits for recycling your home kitchen scraps.

These clever, hardworking little worms will produce plenty of useful compost and a plant food tea, that will help the plants in your garden grow.

They require very little looking after and are not gross or smelly. Also, they can’t escape and will happily stay in their “home”.

**Affiliate Disclosure: As an Amazon Associate I earn commission from qualifying purchases**

There are two kinds of wormeries:

This kit contains everything you need (except worms) to get started including an easy to follow manual and DVD.

It is worth nothing that the worms need to be purchased separately. 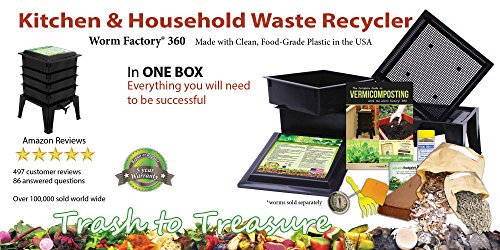 This worm farm set up is attractive enough for the kitchen. Don’t worry it contains the worms within the composter and looked after properly there will be no nasty smells. 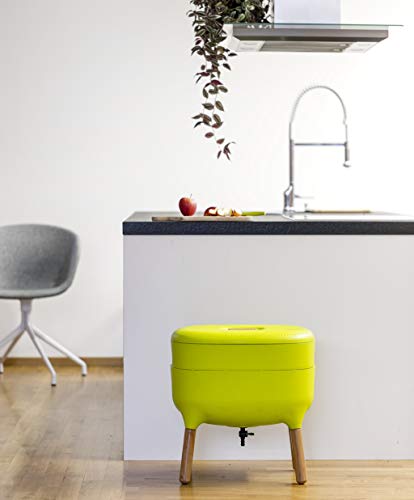 Here are some recommended products that are vermiculture worm composting systems that would be perfect for recycling all your home food waste.

Here we have a product called a worm cafe sounds lovely for the worms!

I love the idea of a worm home on wheels.

Flow thru style worm farm. The kitchen scraps go in the top, and you harvest, liquid fertilizer and compost from the bottom.

Here is a worm farm compost bin that can be safely kept inside the home. Apparently if you look after the worms well there is no smell and the worms won’t escape.

Worm Compost Bin that is Suitable for Indoor Use

When you are looking after your worm farm you will need some additional tools and accessories to make the job easier.

One essential is the chart that tells you what you can safely put in your worm composting bin.

You really need this if you are trying to get the entire family on board.

Infographic What can I put in my Worm Composter?

How Does Worm Composting W?

It is amazing to think that your worm farm compost bin can convert waste products from your home into compost and “worm tea” that will improve the fertility of your garden.

What Can I Put Into My Home Worm Farm?

We recommend that you put chopped pieces of vegetables and fruits into your worm composting bin. But avoid anything from the citrus family like oranges and lemons.

How to start worm composting

Do your research there plenty of resources out there for you to read. We can find a tutorial with easy to follow tips on keeping worms inside HERE. Or information on outdoor wormeries HERE.
Your first decision is the location of the wormery. It needs to be kept away from areas with extremes of heat so neither too cold nor too hot the worms will thrive in temperatures between 40˚F to 80˚F. The bin needs to be accessible as you will need to feed the worms regularly.
For a beginner a starter kit is probably the best choice, as they come with instructions and everything your need to get started (except the worms and the first feed).
When setting up the wormery you need to provide the worms with a home of damp organic matter like shredded newspaper, straw or hay. Add something gritty like sand or limestone, ground up eggshells or oyster shells.
Once the worms arrive start to fed them kitchen waste in same qualities. Increase the amount of scraps you add once you can gauge how much your worms are eating.
Look after your worms well and they will repay you with nutritious compost and liquid fertilizer.

How long does worm composting take?

Your first useful amount of compost will take around 3 months to produce.

What kind of worm is used in worm composting

The most common and best types of vermicomposting worms are known as red wigglers (Eisenia fetida) and red worms (Lumbricus rubellus). Both species will thrive in a worm farms with minimal care and attention.
The common earthworm is not suitable for vermiculture.

How does a flow thru worm composting bin work

This system has a series of boxes stacked on top of each other. The central box holds the worms and bedding. You place a layer of worm food on top of this box.
Underneath a box allows you to access the worm compost without having to disturb the worms. The compost falls through a grid that keeps the worms.
A watertight section right at the bottom collects the nutritious “worm tea” via a spigot. This tea is diluted and used as a liquid fertilizer.

How do you do worm composting in the winter

In colder areas of the country you need to bring your worm farm inside. Monitor the inside of the bin if it dips below 40˚F consider bring the worms inside. A shed or garage might be ok, but in freezing climates the worms will need heat so an area like a utility room might be suitable.

What is the liquid from worm composting called

The proper name for the brown liquid the seeps from your worm farm is worm leachate. However, this is often referred to as worm compost tea.
More information HERE.

When you first hear about worm farms it all sounds gross.

But as we dig deeper, we can imaging all the little worms that work so hard to recycle all our food waste.

A worm farm is a must have for anyone keen on recycling and gardening.

Looking for More Trash and Recycling Organization Ideas? Check These Posts Out!

organizedsparkle.com is a participant in the Amazon Services LLC Associates Program, an affiliate advertising program designed to provide a means for sites to earn advertising fees by advertising and linking to amazon.com